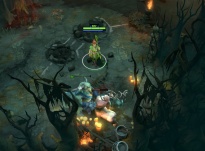 in the middle of Jungling

Jungling (also referred to as bushing or neutral creeping) is when a player concentrates on killing Neutral Creeps Neutral creeps are a type of creep not controlled by any player. They are aligned to neither of the teams, and offer an alternative source of gold and experience. Neutral creeps appear in small camps

during the game, usually for additional Gold “ Play Now that s how you make gold. Click to listen— Alchemist ” Gold is the currency used to buy items or instantly revive your hero. Gold can be earned from killing heroes, creeps, or buildings. Contents

or Experience   Main   Changelogs     “ Play I grow stronger! Click to listen— Storm Spirit ” Experience allows heroes to level up, which makes them stronger and allows them to learn new abilities. Experience is earned

. It refers to the Forests or Jungles between the lanes on either side where Neutral Creeps commonly spawn.

Neutral Creeps Neutral creeps are a type of creep not controlled by any player. They are aligned to neither of the teams, and offer an alternative source of gold and experience. Neutral creeps appear in small camps

will spawn in camps in the jungles starting at 30 seconds into the game, and will respawn every minute of the game assuming the camp has been cleared. To clear a camp, it must have no units inside it, including Neutral Creeps, Heroes and/or wards (note:lane creeps don`t block camps). Creeps can be lured out of a camp, but will return after a period of time. Effective Junglers can use this to remove Creeps from a camp during the respawn time, so that a second wave appears while the first wave is still alive. This is called Creep Stacking Creep Stacking is the process of drawing neutral creeps away from their camps in order to increase the number of units in an area. Generally, neutral creeps will spawn in the first 30 seconds of

. They can also trick creeps into following them into their lane where their Lane Creeps Lane creeps are a form of creep that automatically move down the three lanes towards the enemy faction s base. Each and every 30 seconds a new group (the creep wave) spawns for each faction at 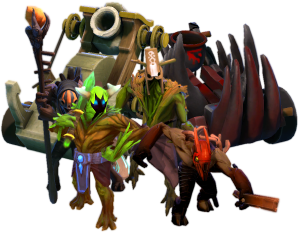 will engage. This is called Creep Pulling.

Jungling allows a Hero to earn Experience   Main   Changelogs     “ Play I grow stronger! Click to listen— Storm Spirit ” Experience allows heroes to level up, which makes them stronger and allows them to learn new abilities. Experience is earned

and Gold “ Play Now that s how you make gold. Click to listen— Alchemist ” Gold is the currency used to buy items or instantly revive your hero. Gold can be earned from killing heroes, creeps, or buildings. Contents

without being threatened by enemy Heroes, or having to split Experience gain with Allies. Additionally, Jungling makes last hitting significantly easier, and has greater returns in general compared to Laning. Be that as it may, a Jungling Hero cannot be in lane, meaning that it effectively forces a team to have an additional solo lane. More solo lanes has its own advantages, but also leaves another Hero vulnerable, especially because the enemy team doesn`t need to sacrifice as much to put pressure on them. Jungling is also difficult for newer players, and requires plenty of practice to work.

Summoner Heroes can Jungle very well because they don`t have to attract the Creeps` attention in order to deal damage. Summoners refer to Heroes that can not only summon more units, such as Enigma   Hero   Strategy   Counters   Equipment   Gear   Responses   Sounds   Lore   Old Abilities   Changelogs     Enigma 17 + 2.4 14 + 1 20 + 3.4 Level Base

. Summoners will often prioritize getting Mana regeneration over Health, due to high Mana costs associated with their abilities. Often, they`ll purchase a Clarity   Item   Changelogs     ClarityB Clear water that enhances the ability to meditate. Cost50 Bought FromConsumables Active Regenerate Mana Charges 1 Disassemble? No Alert allies? No Recipe The Clarity is an item purchasable

early to keep their Mana up during the game.

Generally speaking, Summoners have an easy time Jungling because they just need to stand back while their units take care of the Creeps. Summoners that can convert Creeps are also capable of taking on Medium and Large Camps early on, while other Heroes should generally start with Small Camps.

Area of Effect Abilities make for more effective Jungling because they allow the jungler to attack multiple creeps at once, rather than concentrating on single targets. In Jungling, there are two kinds of AoE Heroes: Mana-independent and Mana-dependent.

and Creep Pulling in order to increase the effectiveness of their abilities.

Mana-dependent Heroes need a decent amount of Mana to use their AoE Abilities. These Heroes should focus on items that boost both their Health and Mana regeneration, such as a Bottle   Item   Changelogs     BottleBL An old bottle that survived the ages, the contents placed inside become enchanted. Cost650 Bought FromConsumables Active Regenerate Charges 3 / 1 Passive Store Rune Disassemble? No Alert

, but should concentrate on keeping their Health and Mana regeneration as high as possible. Kiting is recommended to avoid taking damage while low on Mana.

Heroes with Lifesteal Lifesteal allows the attacking unit to gain health when damaging an enemy, which includes any attack modifier with attack damage. The lifesteal ability can be gained via items, passive abilities or the auras of other

, can jungle Mana-independently and with a reliable source of Health Regeneration. Be that as it may, the amount of Lifesteal might not be sufficient in the early game and their Jungling speed is rather slow, making them more effective in the lane. Jungling with these Heroes might also force the user to distribute their ability points in an unusual or ineffective way.

and items that increase their Jungling speed, such as Quelling Blade   Item   Changelogs     Quelling BladeBL The axe of a fallen gnome, it allows you to effectively maneuver the forest. Cost200 Bought FromArmaments Active Chop Tree or Ward Passive Quell Disassemble? No Alert

Creep Stacking is a process in which a Hero draws Neutral Creeps away from their camp so that they leave the area before a new wave of Creeps respawns. This allows players to significantly increase the number of Creeps in a particular Camp, allowing them to earn more Gold and Experience from a single Camp, or increasing the effectiveness of Creep Pulling. Creep Camps can be Stacked indefinitely, allowing there to be massive amounts of Creeps at one time.

Creep Pulling allows a Hero to "pull" a group of Neutral Creeps into their lane, causing them to attack their Lane Creeps. This is executed by getting the attention of a Creep Camp nearest to the lane and timing it with the spawns of the Lane Creeps. Pulling allows Heroes to avoid damage from Neutral Creeps and bring their abilities off Cooldown, while also denying friendly Creeps and preventing the enemy from earning Experience.

to make ganks easier. Wards, when placed inside the spawn area of a Neutral Creep Camp, can also be used to prevent the Neutral Creeps Neutral creeps are a type of creep not controlled by any player. They are aligned to neither of the teams, and offer an alternative source of gold and experience. Neutral creeps appear in small camps

from spawning to limit the enemy Jungler`s options and income. A shadow blade or smoke can help you enter their jungle without being seen to gank.

While the lanes are relatively wide and open, the jungle is full of narrow, winding pathways, as well as ramps and highgrounds. All of these features can be used for hiding, whether it`s offensively or defensively.

When attempting a gank, the attackers usually don`t wander into the lane. This will let the enemy know their whereabouts immediately, and they`ll be instantly enabled to avoid being killed. Approaching the target area through the jungle will mean you can stay behind the trees to keep out of sight. Especially spells and abilities that can go through trees (such as Pudge`s Hook and Keeper of the Light`s Illuminate) can benefit from being casted out of sight.

Using the jungle`s paths` nooks and crannies, it is a good place to flee from your enemies by juking and hiding behind trees - sometimes more so than running along a lane. Knowing the twists and turns by heart will help you navigate among the greenery.

As mentioned, the jungle is a popular starting point for ganks. Hidden by the trees, people use that space to prepare and position themselves for a kill. Moving into the early mid-game, awareness of what`s going on in your jungle becomes an important factor, and placing wards to keep an eye on any movement in and out of the area will help you react in time to the enemy moving in.

To read about the specific creepcamps, see: Jungle creeps

The jungle has several neutral creepcamps in it that have various uses. The most common ones are jungling, pulling and farming.

Jungling mainly refers to certain heroes ("Junglers") starting out their game not in a lane but in the jungle. Only certain heroes can pull this off, but some benefit greatly from it. The main reason for jungling is giving the team access to additional experience and gold - while gold and experience from the lane doesn`t have to be pooled or split. The disadvantage of jungling is that, since you`re alone in the woods, you`re both susceptible and vulnerable to ganks.

To control the creepline, a player can aggro a neutral creepcamp that`s close to the lane, and have them chase him into the lane. There, the neutral creeps can collide with your own creeps, kill them, and denying your opponents the experience and gold they would yield.

Later in the game, when your more farm-dependent heroes have the levels and items to quickly kill groups of creeps, they can use the neutral creeps to gain more gold. Enemy creepwaves only spawn once every 30 seconds, meaning that if you kill a wave in 10 seconds, you have another 20 seconds before you can engage the next one. This left-over time can be used to quickly kill some neutral creepcamps. The key item in this situation is the Battlefury. When equipped, all the damage dealt affects all the creeps in the camp, making farming much more efficient. When combined with mobility, you can quickly clear the camps before returning to the lane. The staple example of a hero that grabs some additional jungle farm is the Antimage with a Battlefury, who using his Blink ability can quickly skip from camp to camp to clear them before returning to the lane.

NOTE: Killing the creeps in the lane yields more gold than those in the jungle. With some exceptions, farming jungle should therefore only be an addition, never a substitute.